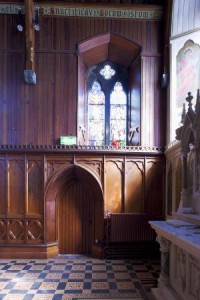 In the early 19th century the Waterford Health Park site was part of the Wyse family’s holdings since their acquisition after the dissolution of the St John’s Priory endowments in the mid-16th century. The Wyses were one of the few Catholic families to retain their wealth and possessions during the troubled reformation and plantation periods in Ireland. They were receptive therefore to the request from the nuns of the Presentation order for land on which to build a convent and school. The nuns’ stock in Waterford as educators of the daughters of the poor was high at the time. The new order of Presentation sisters had been operating out of premises in Hennessy’s Road since the beginning of the 1800s and needed better accommodation. Such was their reputation that they had no difficulty in acquiring the consent of the Protestant bishop (a legal prerequisite at that time) to open a new school on the site.

In February 1841, three Waterford citizens took a lease of five and a half acres on behalf of the nuns in the townland of Clowne, Lisduggan. The leaseholders were Thomas Meagher (first Catholic Mayor of Waterford and father of Thomas Francis), Robert Curtis and John Kearney. The landlord Thomas Wyse, gave the lease for the building of a convent for the Presentation sisters or any sisterhood.

To design the building ‘the most celebrated architect’, Augustus Welby Northmore Pugin was engaged and he was present in person when the foundation stone was laid on the 10th June 1842. The main contractor was Richard Pearse (or Pierce) from Wexford, who was often employed by Pugin for his work in Ireland, although the workers were local. It was a welcome boost to employment. In 1842, there were 26 labourers and 25 masons employed. The following year there were 10 carpenters and 2 sawyers employed. In 1844, two slaters were employed with a stonecutter joining in 1846. Unfortunately the effects of the famine from 1845 affected progress and any funds available were needed for the poor. In 1847, the Poor Law Commissioners were in search of premises to open an auxiliary workhouse and approached the nuns to lease their convent on Hennessy’s Road from which they had been operating a soup kitchen. To facilitate this request, some of the nuns appear to have moved into the unfinished building at this stage prior to the Order’s taking official possession of the site which now had to be postponed until the 3rd May 1848.

In 1861 a citywide appeal for funds was organised by Dr Cleary, an important local cleric. A meeting of ‘influential citizens’ was held in the Cathedral sacristy on Sunday 26th May at which it was decided to make a public collection at the doors to all the churches of the City on Sunday 9th June. The appeal was printed in the local papers over the name of Dr Cleary and the response was apparently most generous. The total collection came to 317 pounds, 3 shillings and 4 pence. Less than two years later the chapel was blessed and consecrated by Bishop Dominic O’Brien on the feast of the Finding of the Holy Cross, 1863. There was a lot of interest from the citizens of Waterford and newspapers carried long columns with detailed descriptions of all parts of the chapel. In 1866, the chapel was further embellished by the addition of ‘splendid new stained glass windows’ which were unveiled on Sunday 21st April.

Pugin’s convent building seems to have been built in one, albeit drawn out constructional phase, apart from the finishing of the chapel internally as already mentioned. Based on the map and photographic evidence, the building has undergone a number of changes over the years, although the vast bulk of its fabric is intact, as Pugin would have intended. In the early 1960s, the main foyer was refitted as extra residential floor area on two levels and this magnificent volume was temporarily lost. Externally, these works included the removal of four lancet windows to the northern gable and their replacement by a single opening as well as the removal of a side chapel to the north-western corner, similar in style to the sacristy on the other side. At the same time a series of large dormers was added to the roof, resulting in structural damage to many of the timber portals and trusses. A substantial portion of the works to the new medical centre involved the restoration and repair of this structure and its presentation to public view.

In 2006 the Presentation Order of Nuns vacated the building and it was bought by Dr. Mark Rowe. In 2009 the building was transformed and opened as a World Class Primary Care Centre renamed Waterford Health Park.

The Rowe Creavin Medical Practice are delighted to now offer our patients the facility to pay for a doctor/nurse visit online. WIT students can also use the link below to register with our practice.