Augustus Welby Northmore Pugin (1812-1852) was one of the most important figures in English and Irish architecture of the 19th century. A convert to Catholicism, he believed in the spiritual qualities of architecture and felt that its truest nature could only find expression in the creation of religious buildings. By the time he arrived in Waterford in 1842, Pugin had already had numerous contacts with Ireland, including a meeting with Daniel O’Connell in 1838. The convent was probably designed during that same prolific period in the early 1840s which saw the construction of his churches in Gorey, Enniscorthy and Killarney. He must have seen this building as a chance to carry out his ideas on the ideal convent plan and the resulting layout, as well as much of the constructional detail, are directly from mediaeval reference, and his published ideas of the time. Pugin is reported to have followed this site quite closely and was present at the laying of the foundation stone on the 10th of June 1842. Most likely the work was overseen by Richard Pierce who frequently acted as Pugin’s clerk-of-works in Ireland.
Most of the decorative features, from the lettering of the inscriptions to the rood-screen and encaustic tiles of the chapel, issue directly from the Pugin lexicon. There are noticeable similarities in this convent layout to his images of the Handsworth Convent of Mercy and his ideal abbey as shown in â€˜Ecclesiastical Architecture in England’ from 1843. Externally these include the stepped or â€˜staged’ buttresses to the external walls, the wall-mounted chimney breasts, the decorative kneelers and verges, the lancet windows, the turret, and the uncapped chimney stacks. Especially noteworthy on the roofline is the huge â€˜fumistiÃ¨re’ or mediaeval smoke stack from the vast kitchen fireplace. Internally, floors and fireplaces are carried on stone corbels in the mediaeval tradition and the ceiling rafters are left apparent. 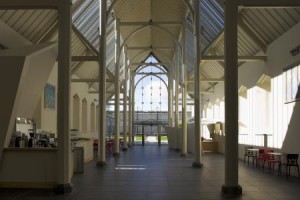 The timber structure of the main entrance foyer is a remarkable reinterpretation of the nave and aisle system of the mediaeval cathedral and seems to be unique in Pugin’s work. Its soaring proportion and slender lines as well as its unique inventiveness make it one of the most important surviving structures from that architectural period. Within the convent, the various functions are arranged around the central cloister which in turn surrounds the internal garden. This is the element that Nicolas de Clairvaux described as the Paradisus Claustralis of mediaeval spirituality. These pocket gardens with their many layers of isolation from the outside world were intended as places of contemplation and retreat, often among rose bushes, an earthly haven and a foretaste of the peace of paradise. Pugin would have been well aware of all of these associations and as with all aspects of his work, nothing here was left to chance. While the external elevations of the building are superb and the western elevation in particular is a masterpiece, Pugin demonstrates the full power of his command of picturesque design principles in this central external space, which, while surrounded by buildings, allows the impression of solitude and calm and an unearthly sense of remoteness. 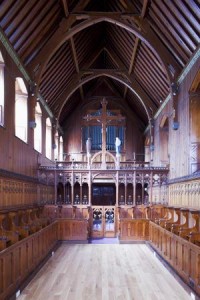 The chapel is its internal equivalent; a place of serenity and nuanced light, despite the darkness of the varnished pine panelling which was probably not Pugin’s original intention. The chapel volume extends to one side of the altar, into a side chapel through a series of sliding screens, and is overlooked on the first floor by opening casement windows from a room that was most likely the infirmary, in the mediaeval tradition. The chapel has retained its rood screen, one of the rare surviving examples of this feature from his legacy (congregations at the time were generally not in favour and most were removed within a few years of their construction). Here it survived to serve the nuns’ sense of privacy and separateness. The altar area retains its encaustic tiling by Minton & Co, the company that Pugin co-founded to produce his tiles according to mediaeval manufacturing techniques. They bear the letters ‘M’ and ‘R’ for Maria Regina’ or Mary, Queen (of Heaven). 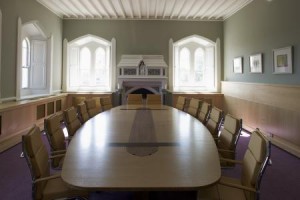 Other decorative features within the building include some elaborate fireplaces to Pugin’s own designs â€“ one in the board room, another outside the consultant’s rooms off the cloister and another in the GP Reception area. All of the building’s original inscription panels are present in their original locations; The cloister cornice panel bears the full script of the Salve Regina or â€˜Hail Holy Queen’ in Latin along all four wings. The old Refectory (now a consulting room) and the Chapel in particular also bear inscriptions while the recent works to the kitchen over the fireplace area uncovered a hidden inscription from the 83rd psalm; “I have chosen to be an abject in the house of my God rather than to dwell in the tabernacles of sinners”.
The building was transformed from a convent to a Primary Care Centre in 2009
Other buildings by AWN Pugin in the South-east of Ireland include; St Aidan’s Cathedral, Enniscorthy; St Peter’s College, Wexford; St Michael the Archangel , Gorey and the Parish churches of Tagoat and Barntown, all in County Wexford. He also is responsible for the banqueting hall of Lismore Castle and the facade of the former seat of the Wyse family; St John’s Manor, Waterford city, which happens to be no more than a stone’s throw from this building!

The Rowe Creavin Medical Practice are delighted to now offer our patients the facility to pay for a doctor/nurse visit online. WIT students can also use the link below to register with our practice.